My world continues to shape itself around rivers. My boyfriend comes from river people. My jobs involve rivers: getting people on them, writing about them, protecting access to them. My favorite past time is being on rivers.

Now that I am less than one week’s worth away from reaching my goal I am starting to sum the pieces of progress. Overall I have a better feeling of becoming one with my kayak (I know a good half second before I am going to flip) and reading rhythms of the rivers more fluently (I have learned to not boof blindly). My body is starting to relax and react without having to think (as much) about what to do, (don’t fight the flip, just roll faster).

Said boyfriend, Phil, has been coaching me all summer on the sport of playboating, which is essentially surfing a very short kayak in a standing river wave. Progression feels painfully slow. Bless Phil’s heart for cheering like mad at my accidental moves that make me look like I know what I am doing. He rolls with my frustration of not being able to surf like a pro instantly and quietly feeds me advice from the eddy.

First step of progress: get into wave. Second step: stay on wave. Third step: surf back and forth on wave. Fourth step: turn sideways, etc. all the way to doing flips and cartwheels and moves that are still only in my imagination. I still consider myself lucky when I can manage to get off First Threat without having my helmet ripped half way off my head.

Recently, I was asked for the first time by a friend if she could follow me down a class IV run that was new to her (not in a class setting). I was as surprised as I was honored, though I tried to show neither because I figured that would be a rookie thing to do and she’d probably look for someone else to follow. It was also a reminder that we give back with pleasure to the community that mentors us into the world of kayaking. 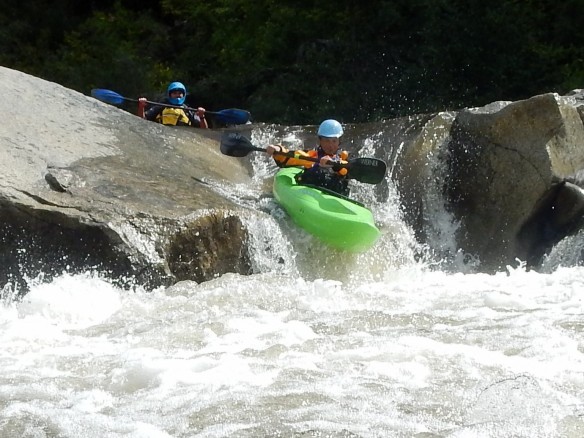 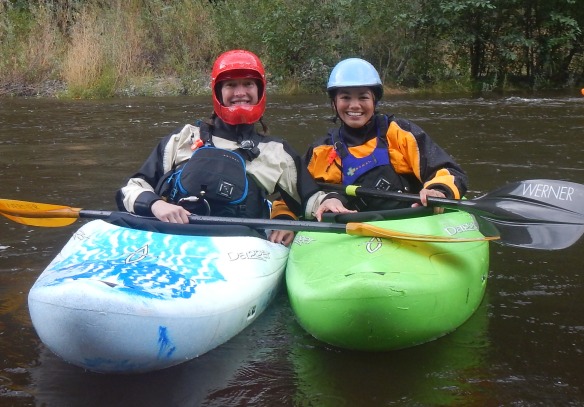 Katy and me on Lobin

In September I pilgrimed to the Trinity River for my first runs down Burnt Ranch Gorge. It was a step up in difficulty and thanks to Wes and Jeff I had stellar runs through my first class V rapids.

Me running the final drop on #3 rapid, Burnt Ranch Gorge

Next weekend it’s on to the Pit River for a dam release run. It will be a new river for Phil and me. And soon after that, will come number 100!