“May what I do flow from me like a river, no forcing and no holding back, the way it is with children.”
― Rainer Maria Rilke

Back in February I made a mid-winter pilgrimage to the Six Rivers region of Humboldt and Del Norte Counties and southern Oregon. I’d waited all fall and most of winter for rain, and finally, the rivers were swelling. I logged 11 days of kayaking out of 13 and was watching my game take a big step up. My 40th birthday was as I wished- a beautiful day on a healthy flow of the South Fork Smith, and I was outfitted in a new dry suit that my friends far and near had rallied together to buy for me.

There’s nothing like the feeling of doing exactly what you want to be doing. It’s something I try to live by and encourage others to do so too. We are here far too short for fiddling around with what’s not important to us.

I never guessed that the next time I came back here would be for the memorial of a fellow kayaker who lived by this same premise.

I hardly knew John Wilburn, I’d only met him briefly on the Feather River, where I filled his and his wife, Erin’s arms full of avocados and limes from home. Then I met them both again, two days after my birthday on a phenomenal trip down the North Fork Smith.

The North Fork group was so large and so full of fun people that I was overwhelmed. My friend Kyle immediately set off, ahead of the group to find his solace on the river. I was left trailing a couple other guys, but found myself somewhat separated from the pack until along came Erin and John.

It was immediately clear he was an expert kayaker. He made his boat dance across waves and fly off rocks. It was also immediately clear that he constantly had one eye on Erin. Not out of concern, but clearly out of love, companionship and the joy of seeing her fly down the rapids too.

We stopped for lunch and John and Erin found a high rock to sit on. John was standing, quietly smiling and Erin grinned ear to ear. Both were completely in their element and had the most satisfied looks on their faces. I thought to myself, that, that is beautiful. They are the embodiment of fully living. At the end of the day in talking with them I knew they would be friends that would stick; The kind of friends whom you can call up at any time as if no time has passed and say, ‘hey, I’m coming up to crash at your place and let’s go boating,’ and they would welcome you into their home. Sometimes you just get that feeling around someone that they are your people and you love them from the moment they smile at you. Sincere, down to earth, genuine. 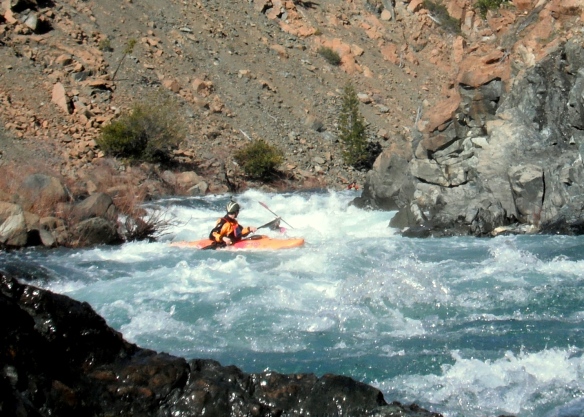 Erin and John on the North Fork Smith

A few weeks later I learned of John’s death. He passed away paddling the upper South Fork Smith on a high water day. He was by no means out of his league, but for reasons no one will ever fully understand, he came out of his boat and drowned. He died doing exactly what he loved to do. Does that make it any easier? Missing someone is missing someone.

Now I have just spent the past few days with Erin, her amazing and wonderful energizer bunny of a mother, Alison, and a handful of heartfelt people who have rallied around to do whatever they can to ease the pain and console one another.

I can’t imagine what it is like to lose a life partner, husband, best friend, travel and boating companion and lover. Having never been married I can only admire what Erin and John experienced together, the best kind of marriage. They were the feather in each other’s cap. Individually, each amazingly strong, vital and loving people. Together, the perfect complement, a united team, supportive, humorous, and caring.

It is sad to lose the chance to spend time getting to know John, though I’m learning him through his friends and family. Erin feels John’s presence and draws on his strength.

When you have complete faith in someone and complete faith in something greater than yourself, you can turn to that and find a strength greater than what you could ever generate on your own. There is no substitute for the physical presence of someone. It hurts, plain and simple. Manifesting pain can literally crush you to paralysis. And no doubt, Erin is feeling some of that. But when I look at her face and I see into her green hazel flecked eyes, there is the most staunch pillar of determination and it is one of the most beautiful and powerful things I have ever experienced.

Her determination to be true and respectful to who John was and to honor both him and herself, drives her with an unimaginable energy. She has brought comfort to those around her who do not have the kind of faith she carries. She has brought inspiration to those around her and she is on a mission to continue living in the spirit of the life that she and John lived together.

I have spent more time in laughter than in tears with Erin. She is hilarious. She sees things for what they are and one can only admire that.

My friend Michelle says there are no coincidences in life. And so, it was no coincidence that I met John and Erin when I did. But that doesn’t mean I will take it for granted. I feel blessed to spend this time with her in her home of just six months in Grants Pass. What she has here is testament to who they were; in such a short amount of time from moving from the East Coast they had already built meaningful relationships.

From the roots of grieving has sprouted a new and unexpected life, one that takes a community to nurture, faith to maintain and time to grow. 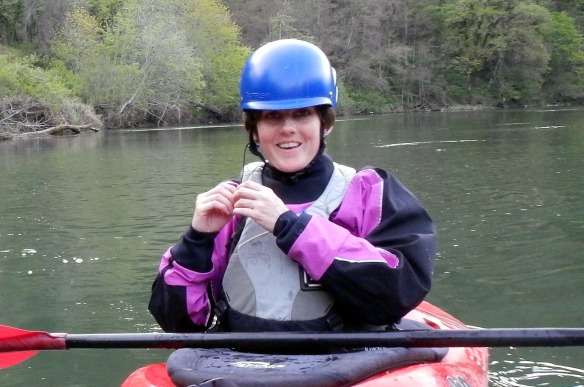 Erin Wilburn on the Rogue River

6 thoughts on “Current of Faith”