Like a dog rewarded with treats, I am what you might call “food motivated,” but because of my aversion to traffic and big cities, I rarely venture into one of the greatest culinary regions of the West coast, the San Francisco Bay Area. When I do, it’s usually because my city friends have bated me with offers to visit their favorite food hot spots.

My response when my sister, Skye, offered to take me out to a pre-birthday dinner at a new restaurant bearing my name was a no brainer, I licked my chops and obeyed orders.

I arrived in the early afternoon to my sister’s Oakland neighborhood that I half jokingly call the ghetto. She assured me (yet again) that this is not the ghetto, that there is much worse not far away. I believe her, but am still suspect to see bars on most windows. I quickly forget where I am though, as soon as I am welcomed into her comfortable home, in a warm room… on a massage table.

To begin my evening of pre-birthday activities she kneaded my muscles with professional prowess into a well oiled puddle, wringing out the stiffness from my drive. I blissed out for a while but she kept me on a short leash. A steamy hot shower to rinse off the massage oil brought me back to the real world and then we were off to explore Bells and Whistles, a new shop on Sausal Creek in Oakland. Skye had picked out one of their bike themed clocks as a gift for me, but gave me the option to trade it in for something else. 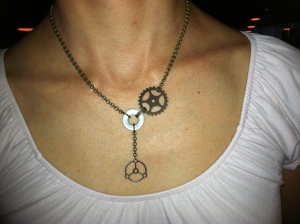 This tiny shop packs in a huge variety of cool crafts from local artists. After much deliberation and trying on of things, I eventually traded out my clock for a necklace made of mechanical parts by Cheryl Brown and Skye took the clock home for herself!

We hopped back on our bikes in a flash and under a light drizzle zoomed through slick Oakland streets to make our reservation at the main attraction for the evening –
Haven, the restaurant.

Haven sits waterside in Jack London Square, Oakland, with a wall of paneled glass that offers diners great views out and brings warmth and sunshine in. Skye took one of the last remaining reservation slots for that day which happened to be at 5:30pm. This turned out to be a perfect time to catch the last rays of sun over the Oakland inner harbor and have a look at the tall ships, Lady Washington and Hawaiian Chieftain, that had just sailed in the day before.

We were led to seats in the middle of a long counter that looks into the open kitchen. Walls of stone, floors and tables of wood, an open flamed oven, slick stainless steel prep surfaces and high airy ceilings create an effortless balance of elements that give the open floor plan a comfortable yet spacious feeling.

Since we were fairly early and the restaurant nearly empty, it appeared that we had an entire wait staff at our beck and call. Every staff person we encountered throughout the evening wished me, “Happy Birthday, Haven.” With emphasis on the name and a wink.

The mixologist whipped up a play on Pisco sours for me with juice from blood oranges and topped with yummy pink foam. Skye ordered a citrus something or other that had passion fruit in it, which, in my opinion, just tastes a bit off when mixed with alcohol.  The cocktail menu changes regularly and even if not all of the ingredients in the drinks sound appealing, they’re at least very creative.

Whenever I know I’m going to a new restaurant I like to look up their menu online and browse. This saves my dining partners some grief since I take so long to make decisions. It also gives me more time to enjoy the anticipation of discovering a new scrumptious treat.

From the moment I saw bone marrow on the Haven menu though, I knew I wanted it. Throw this dog a bone!

This might have been the tastiest morsel of the evening. Soft, jelly-like marrow, salty and succulent was accompanied by scant crispified leeks, shavings of giant watermelon radish and halved pickled French breakfast radishes with drizzles of meyer lemon mingling with oil on the plate. Pinches of freshly baked and lightly toasted bread were perfect for soaking up the last of the liquid marrow and oil on the plate. Sounds like a lot going on, but from afar, the plate simply looked like a couple of soup bones bound for the dog dish.

I shamelessly took bone in hand when the marrow was gone and gnawed on the edges to suck out more juice. It was that good. 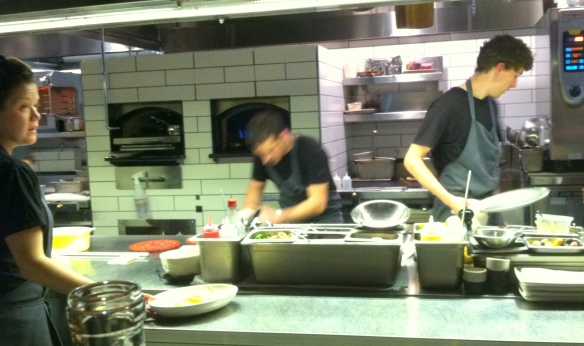 We moved on to a couple of white wines and dug into our second pig course- bacon! It was a nice thick cut of bacon with some chicory salad mix. Tasty, but my mind was still on the marrow.

Our main dish appeared to be the most popular dish leaving the plating counter in front of us and we were nearly sold on appearance alone. Two small stacks of crusty edged scallops were accompanied by small halved roasted red beets, black trumpet mushroom, charred endive and set upon a thick swirl of beet puree with a couple drops of sweet blood orange sauce.

As a side we ordered fingerling potatoes fried in bite size chunks with shiro soy and miso sauce and at least four different species of seaweed. This was the first time I’ve been served seaweed where I could actually pick it up and identify it to species, and they were local species.

The potatoes were great, but after working for so many years in the intertidal and having the smell of rotting seaweeds stuck to my boots I just couldn’t enjoy the greens (and reds as they were). There’s something a little awkward about eating the subject you studied. I passed them on to my sister who ate them with aplomb.

Finally, the dessert menu arrived. I convinced Skye that we should, in fact, get two of the desserts and stop fooling ourselves that sharing one would do. Well, sharing one would have been plenty, the portions are perfect for two, especially after a full meal, but I really wanted to try more than one. Our server sway me away from the chocolate cake to her favorite, the Baked California.

This is Haven’s version of Baked Alaska. Flame charred fluffy sweetness surrounding a hard frozen ice cream ball was set upon a layer of frozen citrus sorbet set upon a thin crispy cookie. A swirl of citrus jell and dollop of avocado whip decorated the plate. Those accessory flavors seemed unnecessary since the Baked California was plenty rich and texturally varied on its own, but the citrus jell was a nice palate freshener between bites of the very sweet fluff.

Our second dessert was a lime tart. The lime center was a bit firm for my taste and the crust, though thick and tasty, was soft. Without much crunch there was little to distinguish it from the filling. Kisses of dulce de leche cornered the slices and it was topped with a sail of wafer thin sesame brittle.

My Leoopold’s Highland Fernet digestif was the necessary medicine to separate dinner from dessert while Skye’s Blue Bottle Coffee was the perfect compliment to the sweet treats.

At the end of our meal we left the packed restaurant and its gracious staff and mounted our bikes for a ride through old town Oakland in the rain. It was the perfect closing to a wonderful afternoon and a great birthday present. Thanks Sis, for showing me such a great time! And as for Oakland, you get less and less ghetto every time I see you, in fact you’re actually pretty damn cool.

Skye and Haven at Haven